Water: The Island’s Source of Life

Jeju's underground is a geological structure where thin layers of lava are piled up one after another like a stack of pancakes. The water that seeps into the ground passes through the lava layers one after another to reach the aquifer, which naturally filters any impurities. It is the world's largest natural water purifier that does not require electricity. As it passes through the lava layers, good minerals also seep into the water.

A poet once noted that the rivers of Jeju flow underground, because, for most of the year, these rivers are invisible. Hacheon, also known as Naechang in the Jeju dialect, can only be observed during periods of rain. Throughout the remainder of the year, all one can see is the plethora of stones lying on dried-up riverbeds. But once the rains come, the rivers appear for about a day or two and then disappear. This is due to the volcanic origin of the island in which the resulting layers of igneous rock prove too porous to retain any water on the surface. Essentially, the entire island acts as a natural filtration system as all of the water flows underground and empties into the surrounding seas. Consequently, Jeju’s water has come to represent the purest source of water in all of Korea. 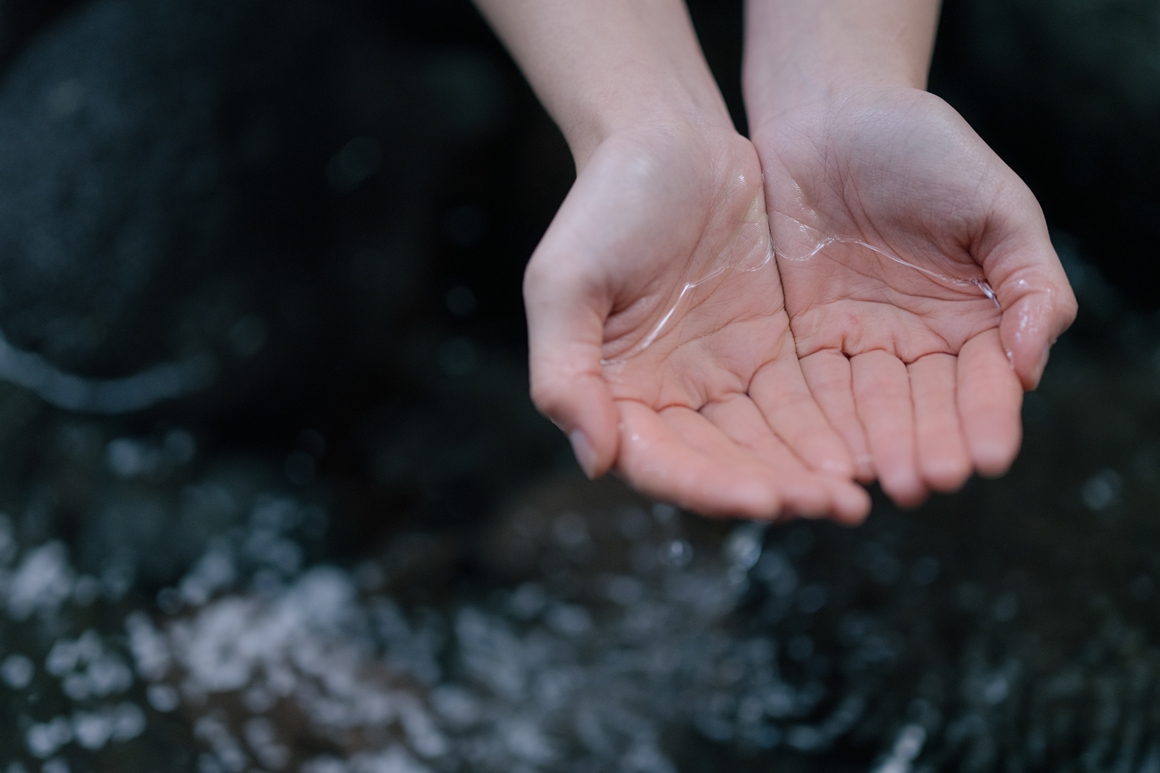 Characteristics of Jeju's Water and Topography

The length of Jeju Island from east to west is 73.7 km, from north to south is 41 km, and has an elliptical shape. Hallasan, the highest mountain in Korea at 1,950m above sea level, is located in the center of the island and slopes down towards the coasts. The water flowing from east to west acts as a river in the Gotjawal and is absorbed in this region, but water flowing along steep slopes in the north-south direction has produced hacheon. The most distinctive hacheon north of Hallasan is Hancheon and Byeongmuncheon, and south of Hallasan is Yeongcheon and Seojungcheon. The places with active water flow are Gwangnyeongcheon, Jungmuncheon, Changgocheon, Sanjicheon, Yeonoecheon, Hyodoncheon, and Gangjeongcheon, while most of the rest exist as geoncheon, or streams without water. 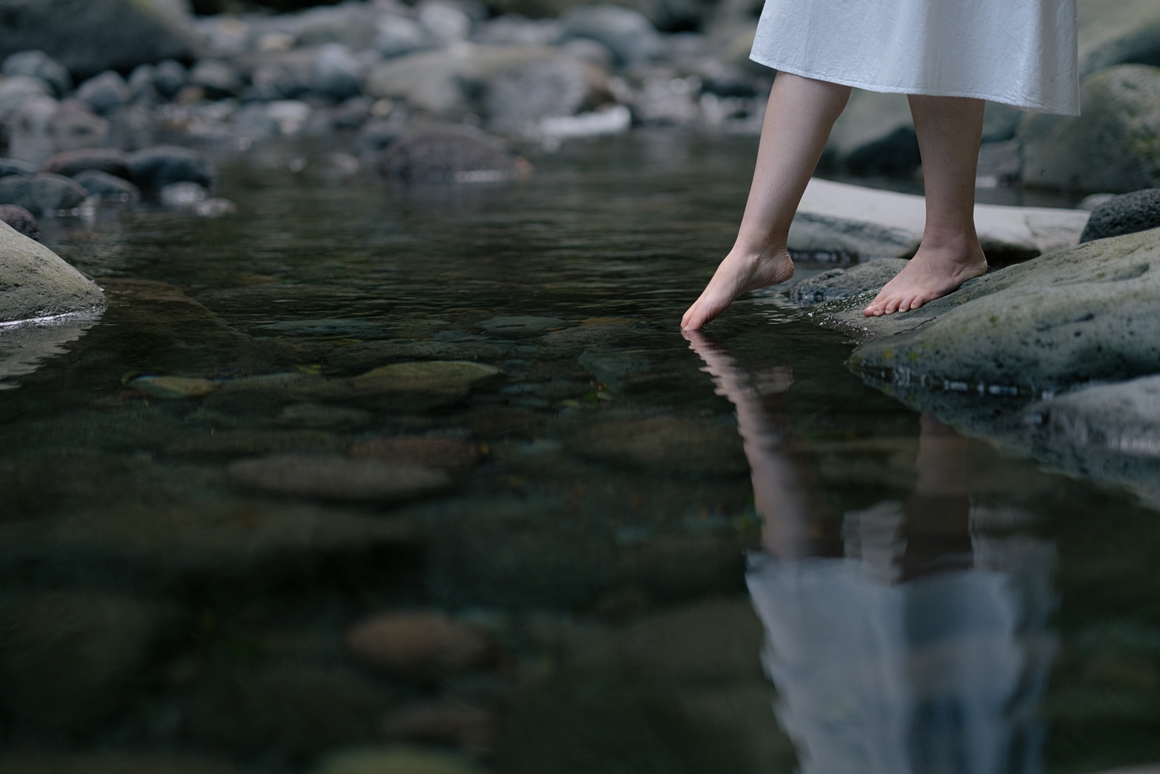 Most streams in Jeju do not have water. Due to the volcanic rock composition, water quickly seeps into the ground, leaving no water to flow along the streambeds. As precipitation seeps into the ground, it becomes groundwater. In areas where lava caves have collapsed or in Sumgol (a place where lava swells and collapses), large amounts of rainwater also become groundwater. The strata that contain groundwater are called aquifers. Groundwater flows along with these aquifers. Wells are dug up in areas in which an aquifer can be reached. Spring water arises when groundwater that has flowed through an aquifer springs to the surface through a stratum connected to the surface or through cracks in rocks or strata. The point where it flows is called a yongcheon (spring). More than 90% of Jeju's spring water is located in the lowlands, areas that are less than 200 meters above sea level.

Jeju's underground is a geological structure where thin layers of lava are piled up one after another like a stack of pancakes. The water that seeps into the ground passes through the lava layers one after another to reach the aquifer, which naturally filters any impurities. It is the world's largest natural water purifier that does not require electricity. As it passes through the lava layers, good minerals also seep into the water. Originally, villagers utilized the coastal areas where spring water gushes out as open-air bathhouses and public meeting spaces. Nowadays, they have become tourist hotspots that provide an authentic experience that is unique to Jeju. Gwakji Gwamul Beach has an outdoor shower that utilizes fresh spring water. At Hwasun Golden Sand Beach, a pool that utilizes spring water is currently being built. “Nonjitmul Freshwater Pool” in Haye-dong, Seogwipo-si is a natural pool where yongcheon water is primarily present during low tide, and yongcheon water and seawater mix during high tide. In Oedocheon, Sanjicheon, Gangjeongcheon, and Jungmuncheon, spring water flows directly into the sea. The freshwater mixing with the seawater creates a unique ecological environment where various freshwater creatures such as ayu, mullet, and giant mottled eels thrive along with other forms of traditional sea life. More than 90% of Jeju's freshwater springs forth along the coastlines. Naturally, people settled around the sources of spring water, and established these springs as the focal point of their villages. Because water is precious and spring water is rare, the yongcheon became the pride of each village. The villages of Tongmul, Eongmul, Bilemul, Gomangmul, Gyeolgeun, Dakknemul, Meogunangmul, Geumsanmul, Jangsumul, and Eongdeokalmul derived their respective names from the pride of their associated yongcheon.

In addition, the spring water served as a kind of membership that distinguished the villagers. In the Korean language, there is a word with a meaning similar to family, “shikgu”. Shikgu translates as “to eat together", which means ‘"like family, though not related by blood”. Jeju people considered people who drink yongcheonsu together as people of the same village, because most did not drink the spring water of a neighboring village.

However, this did not altogether prevent neighboring villagers from traveling to fetch water. When people from other villages came to collect water from one village, it meant that the quality of that village's spring water was widely recognized.

In 1999, the number of freshwater springs recorded by the Jeju-do authorities was 911, but now that number has decreased significantly.

As groundwater moves along an aquifer, the speed of movement varies depending on the structure of the underground stratum and its permeability. Jeju Island's groundwater remains underground for an average of 22 years. Estimates in the eastern portion of Jeju are 20-25 years, 50-60 years in the western portion, and 5-10 years in the southern portion. The oldest source of groundwater has been dated to approximately 62 years, and the most recent source, roughly 1-2 years. The source of Jeju Samdasoo, which is recognized as the highest quality of water in Korea, has remained underground for about 20 years.

The quality of groundwater is greatly affected by the rocks that make up the aquifer. Jeju groundwater is rich in minerals, because it is volcanic bedrock water that is produced in volcanic rock aquifers. Jeju groundwater is generally soft and naturally alkaline, so powdered milk dissolves well, and soaps rinse cleanly. Even after boiling, no sediment remains, so you can enjoy the true taste of tea and coffee. 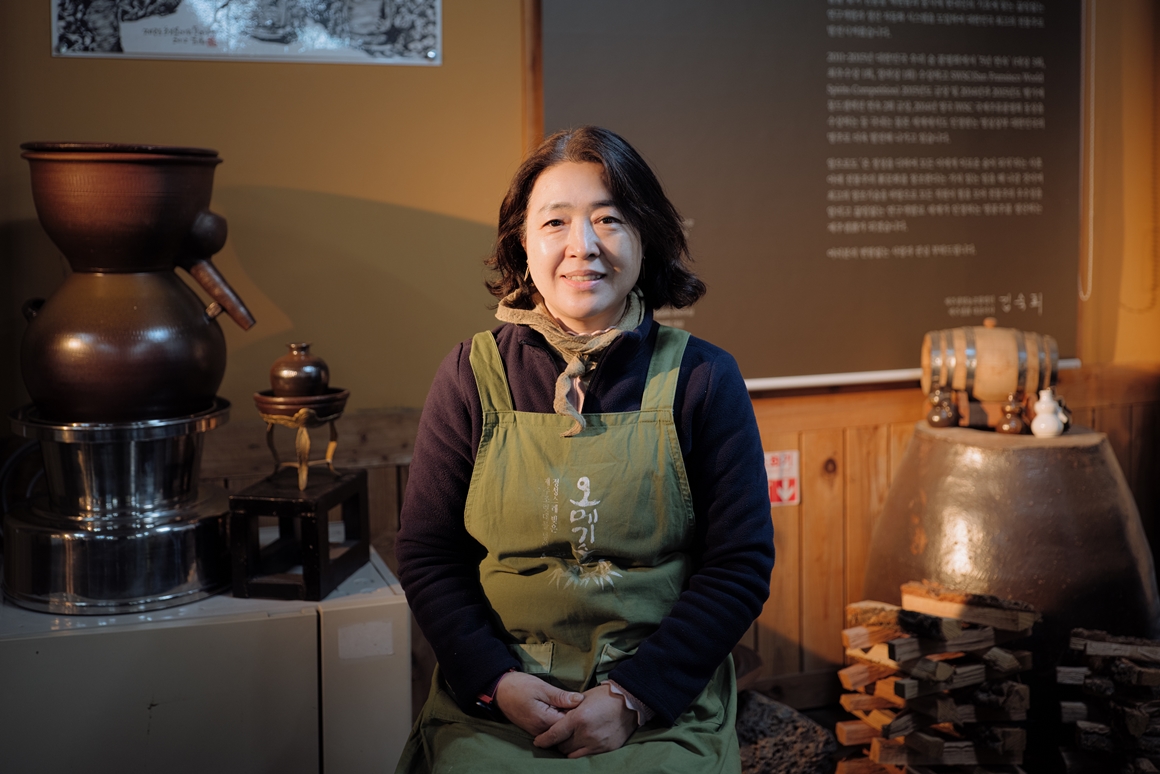 Let us know a little bit about yourself.

I started making alcohol in 2005 and have been running a distillery for about 17 years now. I grew up watching my parents make alcohol when I was young, but I didn't know I would be making my own. There are artisans who make Gosori and Omegi wines, which are traditional to Jeju, but it is unfortunate that the skill is not passed down from generation to generation. I am working on a mission to preserve and promote Jeju’s traditional alcohol. In the beginning, it was difficult to operate because Jeju alcohol was not widely known, but now it is starting to be known by people and the business is running well. What are some good qualities of Jeju water? 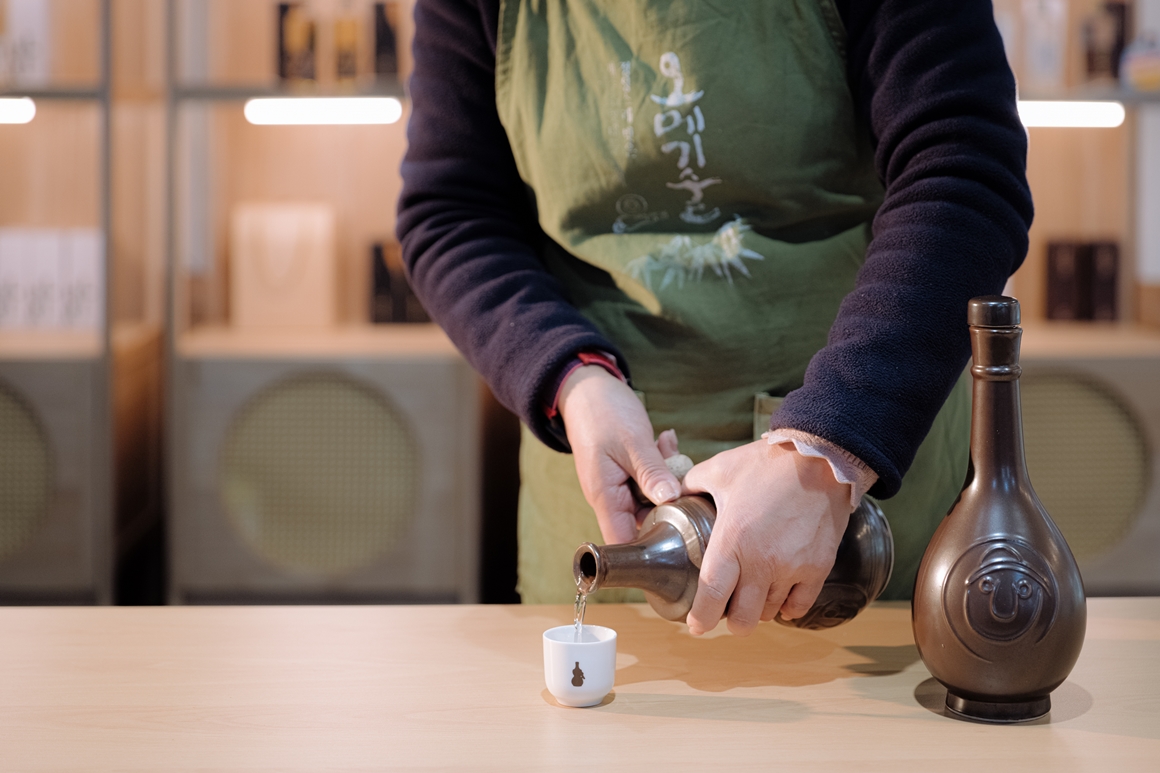 Can you tell us more about traditional Jeju liquor and the kind that you make at your distillery?

Jeju traditional wines include Gosori wine and Omega wine. Omegi wine is a refined wine that is made by fermenting millet and no distilling, while Gosori wine is a soju made by fermenting and distilling rice and millet. We also develop and sell liquor called Ninome, which is made from mandarin orange peels, and Batdi, which is made from green mandarin oranges. Notice
※ The above information was written on 2021-12-28. Please confirm the information prior to your trip.
※ Unauthorized use of the content above (text, photos and videos) is prohibited and subject to copyright by the Jeju Tourism Organization.