The Jeju Olle Trails are a series of 26 walking paths that circumnavigate the island. The paths take in various types of Jeju scenery, from sea views and beaches to forests, country farms, rural villages, and volcanic hills. They’re one of the best ways to get away from the crowds and see a completely new side to the island. This article will introduce three great trails for walking during fall as recommended by the Jeju Olle Foundation. Route 3-A is a 20.9-kilometer trail that takes hikers through the island’s southeast before ending at Pyoseon Beach. Route 12 is on the other side of Jeju, and its highlight is Suweolbong Peak, known for being one of the sites that contributed to Jeju’s UNESCO Global Geopark certification. The final trail we’ll look at is route 16 on the north side of the island. This goes past one of the island’s most well-known stretches of coastal road.

Jeju Olle Trail 3-A is situated on the southwest of the island. It takes hikers from Onpyeong Port to Pyoseon Beach. While it starts and ends on the coast, much of the route is inland, allowing hikers to explore some of the hills and villages that dot the area. A third of the way into the trail, you hit Tongoreum Peak and then Dokjabong Peak. These are two of the 360-plus volcanic hills that dot the island. The climb to the top of each one is short but steep—with Tongoreum Peak reaching a maximum height of 143 meters above sea level. From the top, you are treated to views out over the east coast, reaching as far as Seongsan Ilchulbong Peak on a clear day.
The highlight of the trail during fall are the flowers that line the path. China pink and aster make an appearance at this time of year, painting the course in luminous shades. If you visit in fall, you should also keep an eye out for fields of silver grass. The tall grass blooms throughout the island in October, and it's one of the most sought out sights at this time of year. The grass is especially notable when the sea breeze blows—which it often does—and the plants sway in unison, reflecting light as they do.
Kim Young Gap Gallery Dumoak adds a touch of culture to Olle Trail 3-1. Kim Young Gap was a photographer who took photos of the island’s nature from the 1980s through to his death in 2005. After the gallery, the final stretch of the trail is a 6.2 km path along the coast that ends at Pyoseon Beach, the largest expanse of sand on the island. With a total length of 20.9 km, Olle Trail 3-A is one of the longest on the island. Jeju Olle Foundation estimates it takes between six and seven hours to complete. point, fields stretch out in all directions as you make the 8.9 km hike to the coast. One of the first attractions of note is Sindo Eco Pond, an area that migratory birds call home. This is followed by Noknambong Peak, a 100-meter high volcanic hill with a crater in the center.
When you hit the coast, you start an 8.8 km trail that winds along the seafront. The highlight of this section of the path is Suweolbong Peak. This is a hill known for its unique geological properties. You can clearly see the layers of rock that formed due to volcanic activity in the peak's cliffs. From the summit, you get great views out over Chagwido island—the largest uninhabited islet off the coast of Jeju.
A tougher climb comes towards the end of the trail when you hit Dangsanbong Peak. This forest-covered peak is 148 meters high. It has a distinctive dome-like shape that stands out from the flat farmland that surrounds it. Fall hikers get a final treat in the form of Sengyi Gijeong Cliff, which is covered in silver grass at this time of year. Olle Trail 12 covers 17.5 km in total, and Jeju Olle Foundation estimates it will take hikers between five and six hours to complete. There’s also a 1.1 km stretch between Ungalgil Pathway and Jagunae Port that is wheelchair accessible. 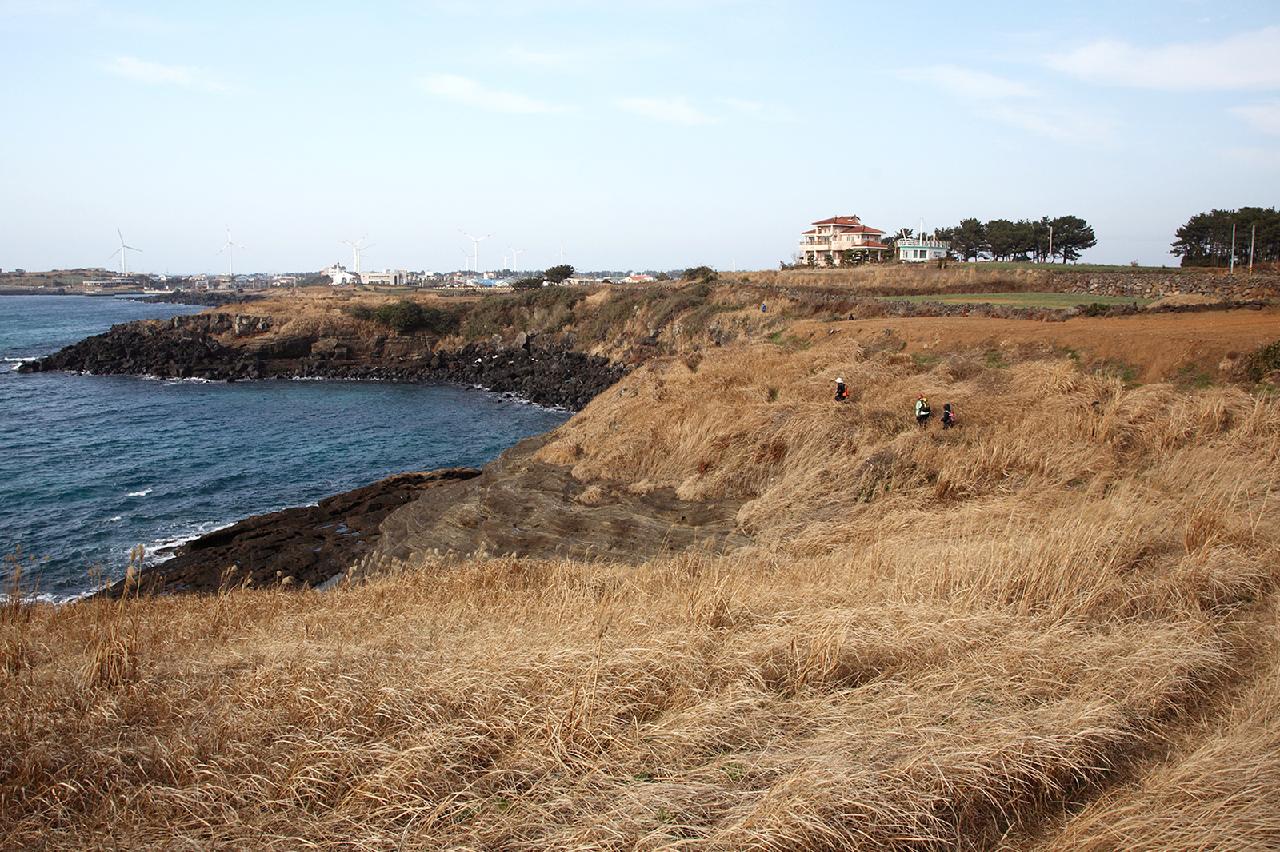 Jeju Olle Trail 16 starts with a 4.8 km stretch along Aewol Coastal Road, a windy stretch of road known for its cliffs and views out over the sea. There are plenty of places to stop and enjoy the view, as well as many cafés and restaurants you can try out. Much of the path travels along the famous road, although there is an off-road section mid-way through.
At the end of the coast road, you reach Gueom Fishing Village. This is home to Sogeumbille Salt Field, a spot that villagers previously used to harvest sea salt since 1559. They did this by building clay dams that created shallow pools of water. When the seawater evaporated, it left the salt behind. While no longer in use, the fields have been restored so visitors can see how they would have worked. From here, you turn inland and soon end up at Susanbong Peak, a small but steep hill that reaches an altitude of 121 meters. You then walk past Susan Reservoir, one of the few places on Jeju where you can see surface water inland.
The path then continues through the area’s countryside, past farms, and down narrow paved roads. The remains of Hangpaduri Fortress is a popular spot in fall as it is home to fields of pink cosmos flowers at this time of year. You then go through more forest before entering Gwangnyeong-ri village, a small rural village that is also the final point on the trail. At 15.8 km, the route is the shortest on this list. It should take between five and six hours. Notice
※ The above information was written on 2021-07-09. Please confirm the information prior to your trip.
※ Unauthorized use of the content above (text, photos and videos) is prohibited and subject to copyright by the Jeju Tourism Organization.